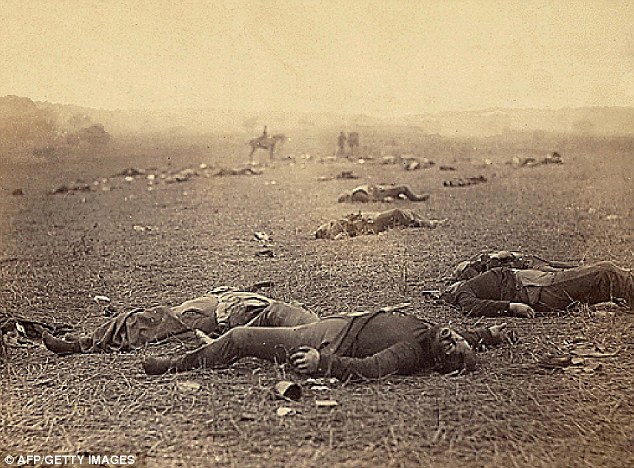 Dying for a Cause is not the same as arguing a Cause.

What stands out about the Civil War (1860-1865, for those of you who still read) is that both sides sent their sons to fight and die for a Cause. Only they were not the same Cause… and only one of the Causes prevailed.

And it was Nature who decided which that would be.

American History the past 150 years been based on the fact that the right side won. The “sin” of Slavery was smitten.

Or was it? Are we getting ready to fight that battle all over again?

All of Man’s history is marred with wars, and in all those wars it was always the young men who fought and died, many times for as little as the lust for power or territory by some prince. And their pay was often no more than a steady ration of meals, plus maybe a little plunder if their side won.

Almost none of those men were volunteers. They were conscripted, often by force.

But in the American Civil War both sides were overwhelmingly volunteers. Why?

Most came from small rural towns, what we would call today the rube classes so what higher cause would they have been fighting for? And their respective “higher causes” were entirely different. In fact, opposites, although I doubt either thought about it in that way, for both sides believed they had God on their side, and that they were doing God’s bidding…one, the northerners, to rise up in arms to liberate 4 million black people living in slavery, because such ownership was contrary to our Declaration of Independence, as designed by the Creator…

…while the other side, 75% of whom were too poor to own slaves, even just one to serve in the kitchen, believed that Old Testament Bible scripture had given Mankind the authority to own other men and women. Even Abraham, one of God’s Chosen, had a slave (named Sarah), and had a child by her. Still he found favor in the eyes of God.

Slavery was very profitable in the South (actually the North too, only the wealth created in the North didn’t affect the 2 million farm boys who enlisted). The principal business in the South, was in cotton, which in 1792 catapulted over all other business pursuits in the United States, all because a Yankee from Massachusetts name Eli Whitney had invented the cotton, thus turning millions of wet, swampy, humid acres in the South into cotton-growing havens, thus turning 6 sweltering territories in the deep South into cotton producing empires.

The downside of this economic boom was it turned the “slavery issue”, which the Continental and Constitutional Congress punted twice, in 1776 and 1787, on the assumption that slavery would die a natural death, into a race for new slave states to be added to the Union, and from that race, the rise of a new political party, the Democratic Party, in 1824, that would cynically rise in power as a middleman broker between the anti-and-pro-slavery factions. From 1820 to 1850 the controlling issue in Congress would be that there be a equal number of slave and free states. With the addition of California as a free state in 1850, that equilibrium was shattered.

So with the election of a third party (Republican) named Abraham Lincoln, whose party carried the abolition of slavery as part of its platform, and probably what got Lincoln elected, the 15 slave states by then outnumbered by 18 Free states, had no other choice but to secede, 11 of them forming the Confederacy.

And being more French than English in their culture and manners, the South fired the first shots at Ft Sumpter even before Lincoln had been inaugurated. A backwoods nobody from Illinois, Abe hadn’t even begun plans to raise an army or develop a strategy, but like Donald Trump in 2016, he was rescued because over a million young men left their villages and farmsteads to enlist to save the Union, only not because of Lincoln’s fine words but because of 4 generations of preaching against slavery….about a people they had never seen in their lives, even in drawings in newspapers.

On reflection, what stands out about this act by those boys is that at the time no one paused to consider that this act of voluntarism was the first “No greater love” act (John 15:13) in world history!

Think about that. Then follow this thought, for while southern men also volunteered, and also died for their cause, their cause was not as high.

But both had been taught as young men for at least four generations, and southern Presbyterians and Baptists had been able to scripturally justify slavery because of the good life it had bequeathed to the upper plantation classes and the trickle down effect.

At the time of the Civil War, 75% of all southerners did not own slaves, nor could afford to, but they had all benefited from of the cotton economic system for over five generations, so that the virtue of southern culture and the European-style ranking system permeated their churches and schools and institutions for nearly a century.

So, while young men from Maine to Iowa, for generations had been taught the Holy Writ against slavery from the pulpit, the young men of Mississippi were also taught its morality.

When two diametrically causes and morality claim the same God as the Author, a clash was inevitable.

What resulted, and almost no one acknowledges this any more, is that this clash of Causes was the first time in the history of Mankind a large number of men (2.2 million) would volunteer to liberate a people that they had never seen, much less personally known. Or that 600,000 of them would die trying.

Let that sink in, for any argument any American has about race has to be built on that single fact.

Today the same set of circumstances exists, two diametrically opposite Causes and belief systems, only one is not God-based. In fact, it is about as anti-God as you can get. But just like 1860, the new anti-God is a result of 4 generations of teachings, chip-chip chipping away, in public schools and colleges, so that neither God, and in all likelihood Lady Liberty, are now no longer allowed.

And in terms of authority, they claim higher education and economic status, not God.

They cannot win….in large part because they cannot fight.